Our media product uses, develops, challenges forms and conventions of real media products firstly by the video being a stereotypical love story. It has a narrative that is easy to follow and has a twist. (The girl likes the boy, finally gathers up the courage to face up to him and finds out he is in love with someone else.) This follows the typical conventions of an acoustic music video because it is usually about love and a scenario that can happen in real life. Our narrative fits with our target audience; it is aimed at teenagers 13-20 years old. It fits well because this is situation which presents numerous issues for teenagers to deal with. People can relate to the video and therefore will purchase it.
The video itself is a narrative and a performance, when editing it was suggested that the performance was in black and white, this was there to show it was not part of the narrative. 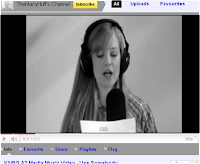 This challenges some conventions of a real media product because most of the time the performance is wanted to link directly to the narrative and most of them are in the colour. We thought that by changing this the message of the song will be put across clearly and our artist will be seen more as the singer she is than just a girl acting in a music video.

We used the artist in the narrative (as shown on the left) because 'use somebody' is her first song, she is new to the music industry and we thought that putting her in the video would help to get the audience recognising her as an artist and listening to her songs.

The video helps develop forms of real media products because it is there to tell a story; for example when the artist is sitting at the window and see the lead male walk past the way she uses facial expressions and body language connotes that she likes him, the way she is hidden behind the window shows that she is shy. We used the shot for when the words "someone like you, and all you know, and how you speak' were sung. We did this so it linked to artists emotion from the shot. We always tried to link the words with the shot to help tell the story but we also developed our knowledge as directors to get the artist to portray this in her acting scenes. We feel this develops forms of real media products because this is what a lot of media products do, especially for the acoustic genre.
We followed typical conventions of media products by using editing to help put our music video together and make it flow. An example of this is when the scene changes; at the beginning of the music video she is watching the sunset. We then put in cross fade, this allows the transition of the shots change smoothly but also acts as a 'dream like' movement in which someone is remembering the story. This fits well with our narrative because the song is a slow tempo and is about the past, things moving slowly or barely changing. The editing programme we used was 'Adobe Premier Elements' .

The Cd covers followed the conventions of a real media product indefinitely. We used a close up of the artist for our front cover image and kept the continuity of font, colour and style through our media products. The close up allows us to advertise the CD when it is on the shelf, it speaks for itself. The audience is drawn into the picture which then leads onto them looking at the name and the CD name. A blur is used in the background to ensure all focus is on the artist and it makes her face stand out more as it contrasts. An effect from Photo Shop ' Lipstick' has been used to make her eyes blue. This stands out against the black and white background and the colour blue connotes calmness and is a natural colour for our outside world (e.g sky) this follows the conventions of the acoustic genre. We made the picture black and white because in the song 'use somebody' for our music video we decided on a narrative and performance. To distinguish between the two, we edited the performance to show in black and white, this is why this picture has been edited in this way to, linking it to our other products. I feel that these edits have followed conventions because real media products will have been edited and changed to make the product itself look better in order to get it to persuade people to buy it.


The tour poster follows the conventions of a real media product because continuity has been kept throughout, the tour poster was one of the last products made and we had to ensure that it reflected the rest of out media products. You can see this with the font; her name is the same and this font resembles a signature which makes it authentic and portrays that this artist is real to the audience. The colour is feminine and stands out against the black Background, once again advertising who the artist is. We have put the dates underneath her name and near the top because they are important information that the audience needs to know, the quicker they find it the more time they have to explore the artist. We have challenged the characteristics of a tour poster slightly as we haven't used an image of the artist on it. That is why the name is at the top and big, because that is how she is going to be recognised. We haven't used a picture because if she is off to do a tour she should have an audience already and will be famous enough to be recognised just by her name at this point. The picture of a set has been used, this set looks like it is ready for the artist to go on stage and perform. We used the chair and microphone in this way because it adds a sense of mystery to the poster and will persuade people to investigate to find out. I think that adding mystery is a good idea because it helps to sell the products.

The combination of our main product, and ancillary texts is effective because it illustrates how we have created a complete promotion package. The video is effective, and we know this because of the positive feedback from our focus groups.As a group we decided to keep the same idea’s in our minds throughout for each product we were creating. This ensured that we could keep a consistent theme and style throughout the media products. This linked them as a package because of the similar styles and themes throughout, when put together and combined, I think our products work very well together. It was important for us to make sure that our music video, CD cover and Tour Poster combined together well and had similarities between them. This is because we wanted out products to look realistic and professional, we wanted them to look the best they could but also link.


We kept the colours, font, artists name the same throughout and this really enhanced the look of our products because there was a consistency. We look at ways in which we could make our products look professional and came up with a music logo 'MOR' this logo can be found on our products and is there to illustrate the music company and also to show the products are linked together.

We asked a total of fifteen questions, below are ten where the focus group picked from one the the answer we had given. The other five required the group to give their own opinion.
We asked an equal amount of females and males to answer the questions and they were from a range of ages. We did this because we could then approach different target audiences as well as the target audience we wanted to aim for. We found that all the participants understood the narrative and this meant that we had clearly portrayed the story and our intentions of the video gave out the message clearly. The audience all thought the video was suitable for teenagers and adults, this illustrated that by setting a target audience 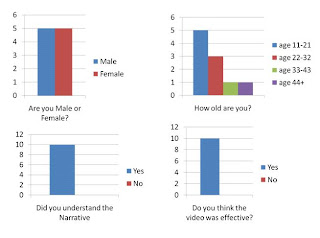 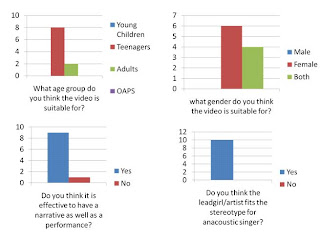 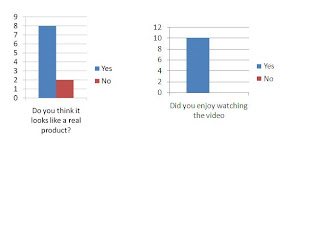 Technology played a major part in the research construction and production of our products. It helped us use sources to research music videos; which in turn helped us and gave ideas for our music video. We could access CD covers and tour posters to study and analyse and this supported us in making our own because we could look at the codes and conventions which made the ancillary products look professional.
You tube has allowed us access to music videos which we researched and analysed; this helped us look at the music video in detail. We looked at genre characteristics, relationships between lyrics, visuals and the music, inter-textual references. We also camera angles and shots, by doing this we could pick apart the videos and note down what detail we could use and follow in order to create our product to the best it could be.
When evaluating the video we could use you tube as a base in which to advertise the video and create focus groups for feedback. This really helped our evaluation stage because we could gather feedback from people after they had watched the video and then use any opinion they had to correct the video to improve it. It allowed us to target a wider audience from all around the world and see how the evaluation stages of creating a music video works. The evaluation stage on you tube also acts a research stage for the future.
Photoshop is another programme we used for the creation of the CD covers and tour poster. After using the internet to research CD covers and tour poster we explored each one and took traits from them to produce our own. After creating mock ups of what we wanted we began to take pictures to use. Photoshop is an editing programme that helped to manipulate the picture to how we wanted it and to add text and other images.
To construct the CD covers and tour poster we wanted to keep a consistent style throughout and photo shop allowed us to do that because we could save the different fonts and colours to use on each one. We created our own music logo ‘MOR’ and photo shop allowed us to do this through the use of inserting pictures and editing it with text. Photoshop has programmes to create effects and this can be seen on the back of the CD cover, we created a ‘spotlight’ effect and it was to relate to the artist on stage with spotlights but also to act as a way to reveal the songs.
Photo shop has been a good programme to use because it allows you to keep a consistent theme, and can do a number of things in which you can use it to control what you want. Photo shop allows you to give your products a professional look and we had good feedback about it which meant we had followed all the codes and conventions and direected it at the right target audience.

Posted by Coleen Broderick A2 Media at 01:46